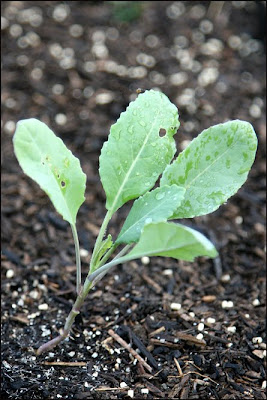 This is our first year growing everything from seed and though the plants are still small, we are optimistic that we will be doing more of the same in the future. In the past, all our brassicas were planted as transplants bought from the local nursery, with lettuce, spinach and peas planted as seeds. 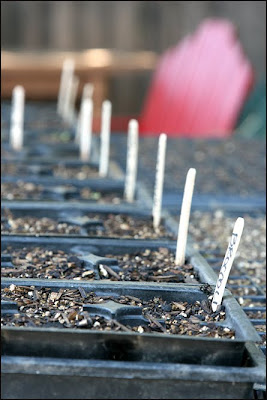 In August, the 6-packs were set out with seeds of cauliflower, cabbage, and brocolli (and onion, but that's another post). We didn't direct seed because our garden was still in production and with weeks of heat left in the Valley, we could protect the trays of seedlings from the hotter afternoon sun. 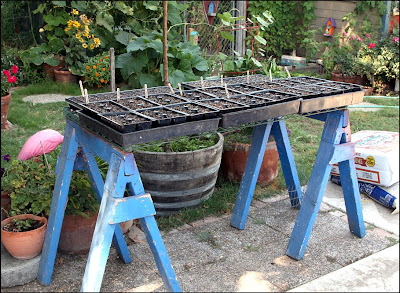 Around the middle of September another flat of seeds was sown. I could say that it was to stagger the harvest, but actually it was an incident involving the cat and our precarious tray set-up...sigh. 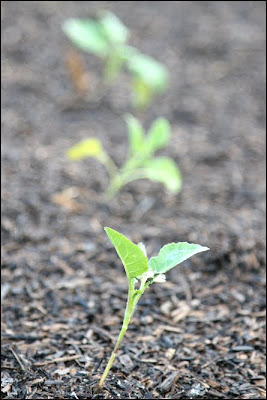 Most of the work in our winter garden comes in October, pulling out the summer veggies (of which several still remain) amending soil, and planting the cool-season crops... 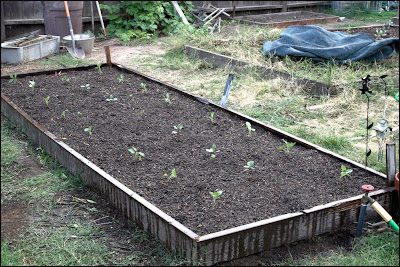 ....and eventually we'll get to that bed of BERMUDA in the background....geez. 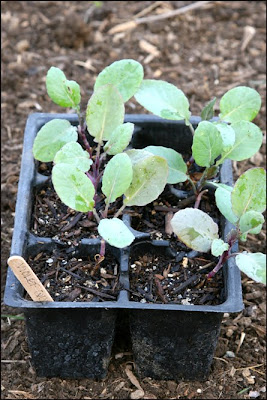 One of the neatest things about starting from seed is that you can pick out varieties that aren't available at the nursery. We chose4 kinds of cauliflower ~ Violet Queen, Graffiti, Charming and Snow Crown....3 kinds of Cabbage~ Early Jersey, Super Red and Ruby Perfection...and 2 kinds ofBroccoli ~ Waltham and Tendergreen. Can't wait to see what Graffiti Cauliflower looks like!
Posted by Maureen at 10:58 PM 2 comments:

This is Who We Are

Steve and I have started a new undertaking towards sustainable living....'renting' land in exchange for veggies. Our home garden is simply not big enuf to support our family of 6 very hungry people and with several trees in the yard to help us get thru the 'hell' we call summer in the Central Valley of California we can only cultivate so much of our city lot ...is a town of 10,000 officially a city?

Follow us on our adventures in gardening in our lovely neighbor Joyce's yard. Our desire is to become strangers to the checkout gals at the grocery store.

(green means we did it :)
* Build picket fence
* Build, mulch, and plant 4 raised beds (did all!)
* Cut down Cedar outside of back fence
* Do research on Heat Zone berries
* Map out and DG (decomposed granite) walkways
* Start Compost Pile
* Till entire yard
* Install drip system